A Canoe for Christmas 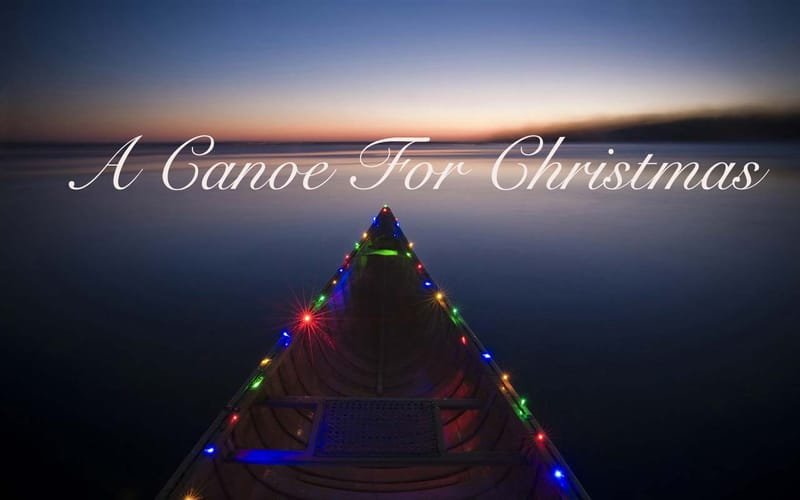 Forty something Irish Dad, Dan Kennedy, a junior rowing champion and former County Footballer, finds himself short of cash as Christmas looms.  He and his wife Helen, along with their adorable young son Michael are living with Helen’s mother Eileen, a kindly woman with a fondness for poitin.

Known in Milltown village as Dan the County man, Dan is popular and endearing.

Having been harshly sent to prison for a week for accidentally parking on a Traffic Warden’s toe, he’s forbidden from driving. His son Michael wants a canoe for Christmas. Michael is also praying for snow, a rare occurrence in Milltown.

Trying to start afresh, Dan’s going to get fit and re-commence work at the local perfume factory as soon as he’s finished his annual lambing duties for Ned, Dan’s feisty father who’s laid up after a fall. And, Dan is determined Michael will have that canoe! But Dan is wrongly blamed for perfume that’s ‘gone missing’ and he’s suspended from work. Worse, he hasn’t been paid.

Influenced by his hair-brained, best buddy, Finbar Gilmartin, (a farmer who sells Christmas trees,) Dan joins Finbar in playing the role of amateur detective in order to clear his name. Their brief efforts at sleuthing lead to hilarious consequences, partly because of Finbar’s over-reliance on American TV Cop shows, but mostly because, when these two get together, they become a right pair of ejits! As Helen says: “Ye’re like Dumb and Dumber the pair of ye!”

But Finbar is nothing if not inventive; it is he who hits on the scheme to get Dan some money for Christmas; enough to buy a canoe! What’s the scheme? Dan will play Santa for two days at the local garden centre. Finbar has sourced the toys in China! Finbar’s niece Grainne, a no nonsense cool chic fresh out of art college, transforms Dan into the best Santa ever. He’s a huge hit.

The problem is, Dan hasn’t informed Helen of any of this: not about his suspension, not about his playing Santa, nothing. He “didn’t want to worry her.”

Helen is keeping everything together, both financially and family wise by working all hours for legal hot shot, Jack Dunne who “looks a bit like George Clooney!”

When Helen visits Santa at the garden centre, neither she nor Michael know it’s Dan. And when Helen kisses Jack Dunne under the mistletoe, she doesn’t know Santa is watching. Is there something going on between Helen and Jack Dunne?

Things are spiralling out of control for Dan. Having zero tolerance for spirits, he finds himself giving in to a rare indulgence in whiskey and consequently wakes up in a very compromising position with local barmaid, Maria! What would Helen say?

All prospects of buying the canoe seem doomed when Dan manages to ‘lose’ all the money they received for playing Santa!

But a ‘break in the case’ may lead to his redemption. He’s tipped off about an impending perfume theft at the factory. He and Finbar go into ‘Mission Impossible’ mode in their hilarious efforts to subvert the theft. These efforts result in them being arrested, but just when things look at their worst, Dan’s ingenuity saves the day: he has placed a tracking device in a box of stolen perfume. It leads the cops to none other than Clooney lookalike, Jack Dunne!

On discovering the mistletoe kiss between Helen and Jack Dunne was a brief and innocent photo kiss for charity, Dan can now focus on getting that canoe.

It’s Christmas Eve. Forbidden from driving, he sells his car and with the cash buys Michael the canoe.  But with the weather forecast predicting an ice storm, all roads are closed. Dan’s only option is to paddle the canoe thirty kilometres home, against the current, against the odds, in time for Christmas. Can Dan do it? On Christmas Eve night, the entire village population waits on the bridge in the village to see if Dan makes it home. As the first snowflakes fall, everyone’s prayers are answered.

A member of the Writers Guild of Ireland, Malachy graduated from NUI Galway with an honours degree in English and History and a Post Graduate Diploma in Communications. He trained as an actor at the Focus Stanislavski Studio, Dublin under the late Deirdre O’ Connell.

Malachy won the gold medal with RTE for Best Radio Drama at the World Festival of Radio in New York in July, 2015 for his first radio play, ‘The Quiet Land.’

‘The Quiet Land’ was also the Outright Winner of the 2014 P. J. O’ Connor Radio Drama awards. The stage version of The Quiet Land has had numerous successful tours.

Malachy’s first stage play, ‘Tillsonburg’ won the Stewart Parker Literary Trust Award, having premiered at the Focus Theatre, Dublin. ‘Tillsonburg’ has had several Irish tours, it had its North American premiere with the Canadian Stage Company, Toronto, played in Rep in Arad state theatre Romania on numerous occasions, the most recent being an extended 12 month run in the Arad 2011/12 season.

‘Tillsonburg’ is published by Methuen Press in the collection; ‘The Tiger in Winter.’

In 2017 Malachy wrote the Virtual Reality Screenplay for Waterford City Council’s new Viking Exhibition Centre – the first of its kind in Ireland.

In 2008 Malachy co-wrote ‘MacBecks’ the comedy musical, with actor Gary Cooke  which premiered in the Olympia Theatre, Dublin in January 2009 and transferred to the Cork Opera House. Malachy also co-wrote the 2008 Pantomime ‘Cinderella’ for the Gaiety theatre and ‘Jack and The Beanstalk’ for the Gaiety 2009/10 pantomime season.

Malachy is included in a recent published anthology of RTE Radio’s Sunday Miscellany for his story ‘The Divinity of Rivers.’