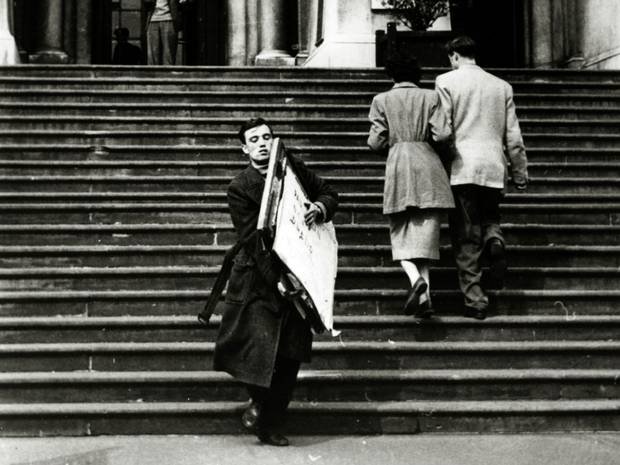 On April 12th 1956, Paul Hogan & Bill Fogarty walked into the Tate Gallery in London and carried out an audacious art heist.  As the two students left building a waiting photographer captured the now iconic images of Paul carrying away an impressionist masterpiece.  This dramatic robbery, carried out as a political protest, would lead to a nationwide man hunt, spark a diplomatic row between Ireland and the UK and generate headlines across the world.   This is the story of that robbery....

When Paul Hogan (20) and Bill Fogarty (22) lifted the impressionist Berthe Morisot masterpiece Jour D’Ete off the wall of the Tate Gallery, waving a forged letter giving Paul permission to examine the paint at an aghast security guard they did not expect to make it outside the front door, never mind down the steps  of the gallery.   Pausing long enough to have his image snapped as he descended the stairs by a waiting press photographer, the pair jumped into a taxi with their stolen masterpiece, everything had gone to plan, actually it had gone better then they expected, so well in fact they had no idea what to do next.

Aided by Mary, a independent, free spirited Irish artist living in London, they go on the run.  Chased by the Metropolitan police and the IRA, the pair headed north with their bounty hoping to smuggle the painting back to its rightful home.  The story hits the world headlines, due to the iconic picture of Paul walking out of the Tate with the picture under his arm.   After four days dodging their pursuers, the pressure starts to tell, Mary hands the painting into the Irish Embassy in London, while the boys slip out of England on a ferry to Dublin.  Despite the massive police manhunt, the boys return home as heroes.  Three years later their mission is completed when the contested painting were returned to Dublin.

Michael Creagh is a writer for film and TV.  He lives and works in Dublin.  His short film The Crush was nominated for an Oscar in 2011.

Feature projects in development include Taking the Picture,  Rello, a comedy drama about a homeless man who falls in love with an opera singer, The Blitz Burglar, a drama set in war time Belfast and Bomb, a low budget feature that follows the exploits of a young Republican bomb-maker.

For TV, he has written Roomies, a serial comedy,  Wolf Town,  a children’s fantasy drama set in Ireland and Harmony Close, a drama serial in post-troubles Belfast.